BLM has recently successfully defended a claim brought in the High Court by a claimant against the De La Salle Brotherhood  (the Order).  The Order is a Catholic Charity dedicated to the provision of Christian education.

The claimant, known as JXJ for reasons of anonymity, claimed that whilst attending an approved school in Scotland, St Ninian’s, in the early 1970s, he was physically assaulted by members of the Order, (who were employed as teachers at the school), and also sexually assaulted by the gardener/night-watchman, James McKinstry.  McKinstry (now deceased) was convicted of sexual offences, including against the claimant, in 2003.

The trial, heard by Justice Chamberlain, was limited to the issues of limitation and liability.

Despite the allegations occurring in Scotland the claim proceeded under the jurisdiction of England and Wales on the basis that the Order is domiciled in England, as is the claimant.

It was agreed between the parties that the Scottish Law in respect of limitation would apply, to include the Limitation (Childhood Abuse) (Scotland) Act 2017.  Expert evidence was obtained jointly in this regard from David Sheldon QC of Compass Chambers in Edinburgh.

In his judgment, Justice Chamberlain held that the claims for physical assaults allegedly perpetrated by members of the Order could not proceed, largely due to the fact that all of the Brothers bar one against whom allegations were made are now deceased, thereby causing substantial prejudice to the defence and meaning that a fair Trial would not be possible.    In the judgment Justice Chamberlain states that ‘My conclusion on those allegations is simply that, at this stage, between 45 and 47 years after the events complained of took place, when the key relevant witnesses are dead, it would not be fair to try them.’

The claimant was not prevented on the grounds of limitation from pursuing his claim that the Order was vicariously liable for the actions of McKinstry.

The Order maintained throughout the proceedings that legal responsibility for the management of the school lay with a Board of Managers who were appointed by the Diocese.  All members of staff, to include Brothers and lay members of staff such as McKinstry, were employed by this Board of Managers, and not by the Order. Although the claimant contended that the Order exercised a considerable degree of control over the day-to-day running of the school, Justice Chamberlain did not consider that there was sufficient evidence to establish a relationship akin to employment between the Order and McKinstry.  In the judgment he states that “the law has not developed to the stage where a person who exercises de facto influence over the operation of a business is, by virtue of that influence, to be held vicariously liable for an employee of the business with whom he has no direct relationship”.

The claimant is seeking permission to appeal.

The full judgment can be found here. 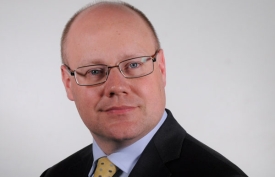